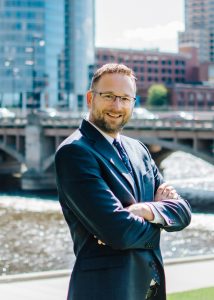 Mr. Matthew S. DeLange is the managing partner of the family law division of the firm and has been practicing almost exclusively in the area of family law since becoming licensed. Mr. DeLange received his law degree with honors and a concentration in Litigation from Thomas M. Cooley law school and received his undergrad degree from Grand Valley State University.  While in Law School, Mr. DeLange served as president of his school’s Student Bar Association for two consecutive years.  Mr. DeLange is admitted to practice in the State of Michigan, the Western District of Michigan Federal Courts and the Supreme Court of the United States of America.  Prior to joining the firm, Mr. DeLange was a Senior Associate attorney with an American Divorce Attorneys for Men (ADAM) affiliate from 2008 until 2015 where he was one of the primary litigators for the firm.

Mr. DeLange’s practice is primarily concentrated in the areas of Divorce, Custody, Child Support, and Interstate and International family law matters.  In addition to his trial court experience, Mr. DeLange has also successfully obtained reversals on Family Law cases from the Michigan Court of Appeals and successfully defended an international family law case before the Michigan Supreme Court.  As a member of the Family law sections of the State Bar of Michigan, Grand Rapids Bar Association, and Ottawa County Bar Association, he has given presentations on Interstate and International related issues at Family Law Section conferences and regularly contributes to the section’s Internet discussion group.

In 2016, Mr. DeLange was named one of the Top 10 Attorneys Under 40 in the State of Michigan by the National Academy of Family Law Attorneys.  In 2018, Mr. DeLange received a Rising Star designation by Super Lawyers Magazine.  Rising Stars is a designation of top-rated practicing attorneys selected through extensive evaluation.